The Curse of Accessibilty

Is Irish whiskey taken seriously? Not according to Mark Reynier, speaking to The Spirits Business recently. He's the guy converting a former brewery in Waterford city to a whiskey distillery.


“I don't think people take Irish whiskey seriously, because there isn't anything with which to take it seriously. It's easy doing accessible stuff, but there isn't a great deal of mind-fuckery going on; it's all just pretty simplistic stuff."

“Our aim is the put some meat on the bones and actually produce some serious whiskey.”

“It gives me the opportunity to challenge Pernod Ricard in Ireland and create a significant Irish whiskey brand with a whole lot of extra credibility that sometimes is missing from big companies.”

There's plenty there I disagree with and I'm inclined - with a nod to Samuel Johnson - to slap a bottle of Redbreast 21yo on the table and declare: "I refute it thus".

I'll agree with him about one thing though: Irish whiskey has a perception problem. And not just among our foreign comrades. Here's Bono, doing a bit of  soul-searching over U2's last album:


"...the album should have had more of the energy of the musicians and those who inspired it... a bit more anarchy, a bit more punk. We didn't want a pastiche of the era so we put all those 70s and early eighties influence in the juicer and a blend emerged... more like an Irish whiskey than a single malt."

Like many whiskey drinkers in Ireland and elsewhere, Bono is using single malt as a synonym for both scotch and quality whiskey, and as an antonym for Irish whiskey. I'm not singling out Bono; this usage is common in Ireland. The news has yet to trickle out that we produce our own quality single malts, along with single pot stills that can stand toe-to-toe with anything from Scotland.


I think this lack of regard stems from the Irish whiskey industry's own marketing script. It's that word that damns with faint praise: accessible. Mark Reynier used it pejoratively above but we routinely introduce our own whiskey as "easy-drinking, approachable, accessible".

It sounds like a positive attribute but it's really code for "not peated like that dreadful scotch". There are smooth, sweet, unpeated Scottish whiskies but if you are not into sucking on chimneys you are playing Russian roulette when you order blindly from a scotch menu.

Even Connemara, "Ireland's peaty whiskey", is only lightly so, and is a sweet, gently smoky malt with wide appeal.

The "accessibility" of Irish whiskey is a historical accident. Nothing mandates the general exclusion of peat from Irish whiskey. Triple-distillation sometimes gets equal billing for upping the smooth-factor but that's not a requirement either. Cooley's range has always been double-distilled, for example.

The accessibility tag served a purpose, which was to shift huge quantities of blended whiskeys. Now that we are trying to showcase the best of non-blended Irish spirits, it's a millstone.

The industry went through this before when Irish whiskey became a kitchen ingredient reserved for making Irish coffee. What seemed like a great wheeze for flogging bottles hobbled subsequent efforts to expand the market.

The time has come to stop defining Irish whiskey by what it isn't. It can stand on its own merits. 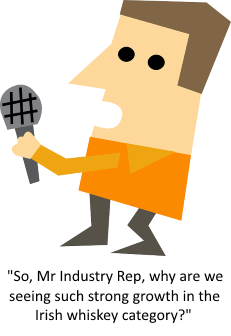 Whoa, hold your horses, there! This is what's creating the perception that Irish whiskey is scotch without the intensity and excitement. Let's try that one more time...

"It's because we have been making whiskey in this country longer than anyone else so we know what we are doing. Irish whiskey starts with our grain and water and is only bottled after years spent quietly maturing in oak casks. It's a process that has been carefully refined over many centuries.

"Irish whiskey is rich with aromas and flavours - spices and herbs, leather and tobacco, flowers and fruits. It can smell of the forest, or the sea, or the Christmas pudding of your childhood. You could spend a lifetime exploring Irish whiskey and never tire of its infinite variety.

"Becoming acquainted with Irish whiskey is an exciting journey that the rest of the world is eager to discover. And we can't wait to share it with them."